Behind The Forbidden Moments Album Artwork

Artwork. It’s your big first impression, your brand, your CD’s statement and something you don’t want to do half arsed. Would you really slap a boring, unimaginative cover on your work after spending thousands on recording? I’ve seen it done.

Even though I had secured funding for the album from the lovely Department of Culture and the Arts and I’d run a successful fundraising quiz night which raised a further $1,300 I still didn’t have enough to pay for a photo shoot. Well, actually I did to start off with. I had a shoot booked with the guy who did the photo for my EP “Little Rendezvous.” Tried and tested, he had done a great job for the EP so the ‘Forbidden Moments’ cover shoot should be a breeze right? ….WRONG!!

As it turned out his usual makeup artist had inconsiderately moved her sweet self to London leaving me with her ‘replacement’ – promised to be just as good with a glowing report, so I thought it would all be fine. THREE HOURS in the makeup chair later and I am finally allowed to go and look. I stared in horror at the clown-like face staring back at me from the mirror (sorry, I didn’t take a picture.) I’m pretty sure my lips weren’t that big and round when we started and my eyes were lined with a thick black rim that made me look like some sort of junkie. There was NOTHING that could fix the disaster that she had created on my face.

I knew then and there that the shoot could not go ahead and so, trying to be polite, I explained what I didn’t like about the makeup (read: everything!) but she insisted on having a go at fixing it.

It’s not something YOU will be able to fix I thought, but I sat down dutifully in the chair to let her spend another 30 minutes creating even more mess. It was hopeless. I cancelled the shoot, made my apologies (hey why was I the one apologizing??) and dashed out, praying no one would see me looking like a circus freak during the drive home.

Once bitten, twice shy I rang up the top modeling agencies in Perth to ask for their recommendations and quickly realised there was no way I’d be able to afford one of their photographers so I decided to hand draw the artwork myself… an easy task for someone who has cartoons published right? WRONG AGAIN!

I start off my art development researching different ideas off the internet. I kept a few pictures I liked in Pinterest (you can see the pin board here).

My first attempt to draw myself goes… ok… for someone who never draws real-life art… and it sort of looked like me. But was it cover worthy? No. I tried a few more ideas and even crack out my old water colours set, make a few pretty looking versions of a girl who doesn’t look like me and put them away again in frustration.

Next I ditch the idea of putting myself on the cover and try to capture the title “Forbidden Moments” as a picture. It definitely doesn’t work. My stress levels are growing…

By now I’ve been whining about my lack of budget and lack of cover art for about a month. Everyone I’ve shown the photo about to says that I need to put myself on the cover, but how?! There is no cash for a shoot and no cash to pay someone else to do a portrait so it’s down to me! As the future of my album artwork looked bleak, in a moment of brilliance Lee Buddle (my sound engineer extraordinaire) suggests I try something retro like the jazz albums that were produced in the 1950’s. A fantabulous idea, I start researching and find that to my utter delight many of them used CARTOON!!!!! I’m SAVED! (The clouds part and the sun shines through)

With renewed energy I sketch a few quick versions of myself and come up with the cover drawing and overall design. From that point on it was a case of my arty graphics designer sister Cathy putting on the finishing touches and WHALAH! A CD cover for my very first full length album!

I really like it, especially because it took so much effort and Cathy and I did it ourselves. I hope you like it too. It is retro pop art with a modern twist and appropriately sultry and sophisticated for its title “Forbidden Moments.”

Here are the steps I went through to create this artwork: I created the background for the actual CD in Photoshop. I wanted it to look like a vinyl record.

STEP ONE: The CD

I started by creating this background for the actual CD in Photoshop. I didn’t know how to do this cool vinyl look when I started so I hit up Google for a tutorial on how to do it, and Whalah!! 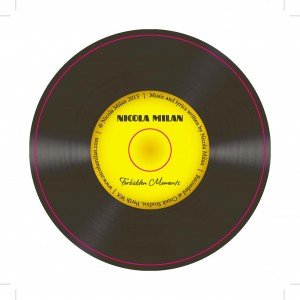 STEP TWO: Add in the text

Next I transferred the cool vinyl background into InDesign and added the crop marks, the yellow and the text. I added enough text around the edge of the yellow to make sure there were no gaps. That took a bit of time fiddling around adding spaces and adjusting the font size until it was just right. Sketches of ideas for the album cover.

I started sketching a heap of random ideas on my note pad. I have a lot more sketches just like this. Most of them got the cut (like the ideas on this page did) Design of me!!! Without any background colours added.

STEP FOUR: Draw an image to represent me for the front cover

I took AGES drawing this image. Those are actually my lips!! I traced around a picture of me that had my lips in the right position. The rest, I kind of made up… but just imagine that its really me ok!! I think the hair in this image is a little longer than mine too. 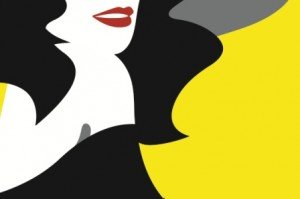 I loved the bright yellow background that I added.

I got the idea to use yellow off an old Ella Fitzgerald album cover. Ella is my FAVOURITE vocalist, so I was more than happy to be connected to her in some tiny way.

This was the final stage where we (my amazing graphics designer sister Cathy helped me out here) gave it the final polish. The black stripes were my idea and Cathy added a gradient and chose the font for my name.

Cathy really has an eye for design and helped me fix up any little lines that were out of place in the main image too.

It took many, many drafts but I’m really happy with the finished product 🙂