How To Draw Skull Bats! 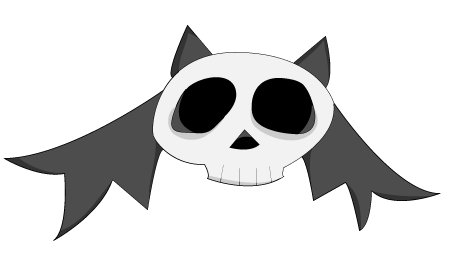 What Are Skull Bats?

Skull Bats are distant cousins of the vampire bat species. Instead of living and going around sucking the blood of unsuspecting cattle and other livestock, the Skull Bat absorbs energy by scaring the bijiggery out of unsuspecting humans.

Non flesh eating (unlike their more unpleasant relative the Zombie Bat), Skull Bats are simply cheeky, mischievous creatures that play tricks on hikers and campers in the plains of the Central North American States.

What Should You Do If You Ever Encounter A Skull Bat?

Whatever you do, never, ever EVER try to handle a Skull Bat. All precautions should be taken to avoid them at all costs. Although they themselves do not attack humans, they are carriers of The Death Slug; a micro-slug that nests inside the Skull Bat’s eye sockets. The Death Slug has been known to devour the corpse of an entire adult male deer in less than half an hour. I just wouldn’t risk getting in touch with one of these unpleasant little fellows. “Death Slug, oh Death Slug, sing me a tune. I’m not that tasty, so hard to chew…” How to be Mysterious

Discover what makes a person mysterious and how capture mystery for yourself. Journey with me into a world of shadows… Being alone, doesn’t mean lonely. This inspirational video shows you how to like being alone and to feel at peace with the time you spend flying solo. 5 daily healthy habits for creatives to help increase your productivity and keep your motivation running at its maximum.